Along with the Stretched Cluster feature that arrived in Virtual SAN 6.1 (vSphere 6.0 U1) another feature that was delivered is the Remote Office Branch Office (ROBO) solution.? For many months customers who typically have a remote office branch office vSphere solution were not best pleased at the fact they needed a minimum of three Virtual SAN nodes per site.? With the ROBO solution the minimum number of hosts per site has changed and the licensing for ROBO is different than the conventional Virtual SAN solution as well.

ROBO solutions from VMware have been around for a while, there is a licensing model for vSphere that incorporates a ROBO solution, and in the days of VMware vCenter Storage Appliance (VSA) there was a ROBO solution for customers to have two ESXi hosts on site with a “Cluster” node as a thin client solution on site too, so technically you still needed three systems for VSA.? So how does Virtual SAN ROBO work? 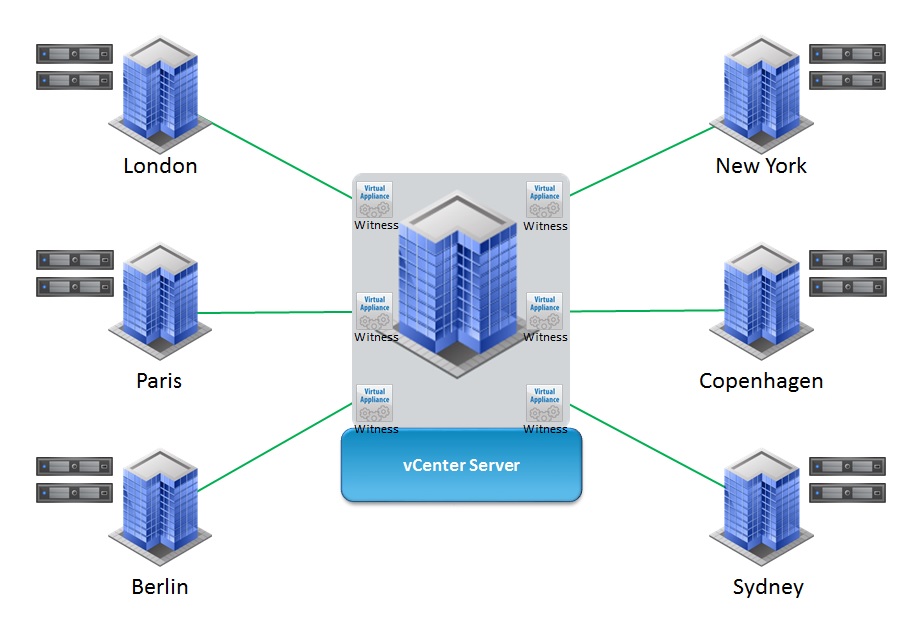 Each remote site will host two ESXi servers running Virtual SAN allowing the RAID1 of disk objects to be fulfilled, in the centralized office there will be a witness host for each remote site, the witness is a virtualised ESXi host and performs the same functions as in the Virtual SAN Stretched Cluster. The storage requirements for the witness appliance also remain the same at 15MB per disk object, the maximum being 25 Virtual Machines having 60 disks each resulting in a maximum storage requirement for the witness appliance of around 23GB.

Unlike the stretched cluster the link between clusters and the witness is much lower, the diagram below shows the requirements:

As you can see from the above diagram, the witness has to reside on a different network to the hosts to prevent I/O traffic flowing across the WAN link and back to the other ESXi host, however the requirements for latency are much lower than the Stretched Cluster, this is mainly down to the maximum number of virtual machines per site being 25 versus the potential 1000’s for the Stretched Cluster.? You will also notice that 1Gb networking between the two hosts on the remote site is fully supported, again this is due to the maximum number of virtual machines that can be ran on the remote site.? It is still recommended to use multiple interfaces as an Active/Standby configuration in order to recover in the event of a network interface failure.

The main question I am asked is “Is it necessary to have a network switch on site”, the answer to this would be not necessarily, the VSAN VMKernel interfaces on the ESXi hosts have to be able to communicate with the Witness Appliance so they could be connected directly to a multiple port router that supports 1Gbps, in the event of a single port router a switch would be required, connecting a crossover cable between the ports on the hosts would not allow communication with the witness appliance and therefore it would not work.

Over the past few days I have spoken with multiple customers about this solution, these customers come from a wide variety of sectors but the end goal remains the same, to reduce the hardware footprint at the remote sites and reduce management overhead, with Virtual SAN ROBO this is easily achieved the main points are: